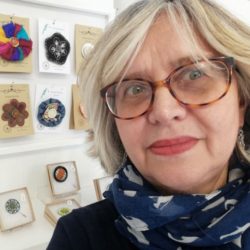 Dorset Buttons is a heritage craft unique to Dorset. The Dorset Buttons Industry originated in Shaftesbury, Dorset, in the 1620s, and became a major cottage industry throughout Dorset creating employment for many families. To help keep this heritage craft alive, my Dorset Buttons are worked in the traditional way but I use contemporary materials and designs.

Specialised in
I first came into contact with Dorset Button about ten years ago whilst Chairman of Gold Hill Museum, Shaftesbury. I taught myself how to make a Cartwheel button from a kit, one of the four designs of the Dorset Button range. I later learnt the finer details from an experienced buttoner. There is no formal training for this craft and over the years I have developed my workshops to try and emulate original buttons. My work includes both small bespoke buttons for garments to large circular wall hangings. My aim is to help to keep this tradition alive and I use the original methods to make my Dorset Buttons working with contemporary materials. Today my inspiration comes from using textiles and yarns that are either local or produced by small independent people, ethical reclaimed sari yarns and vintage yarns, ribbon and lace. I also incorporate beads into some of my buttons.
Open to the Public?
Yes, by appointment only
Provides Course / Training
Yes
Available for Craft Fairs
Available - please ask about pricing 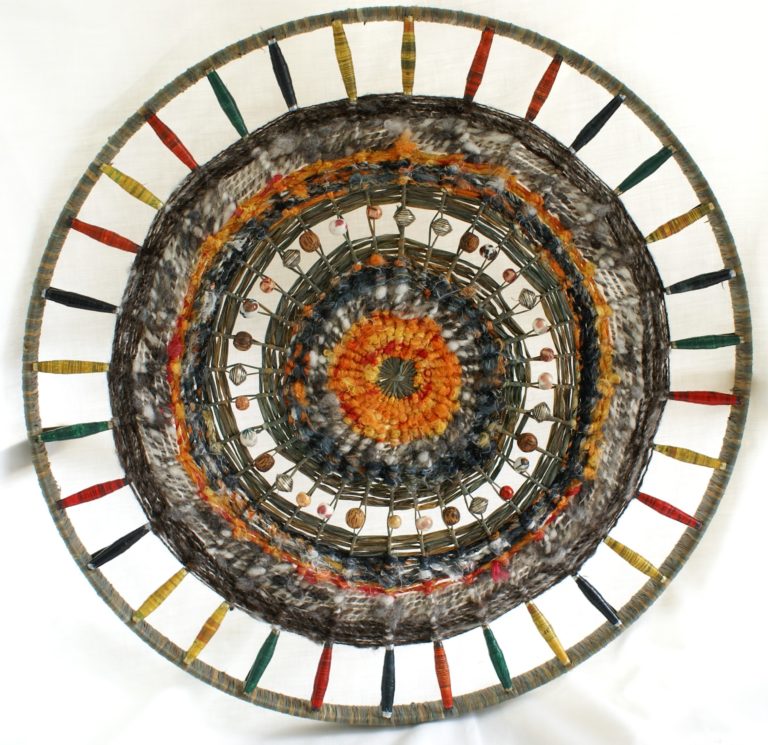 A Study in Beads

This is the first of a series of Dorset Buttons I’m planning to work featuring beads. I love the way beads create a sense of space through the gaps.

I used a variety of yarns including reclaimed sari silk, knitting raffia and hand-spun natural sheep’s wool. The beads in the centre of the button are from my collection. The long beads on the outside I made from paper which I hand-rolled, painted, varnished and enamelled the ends.

This button is worked on a wooden 45cm hoop 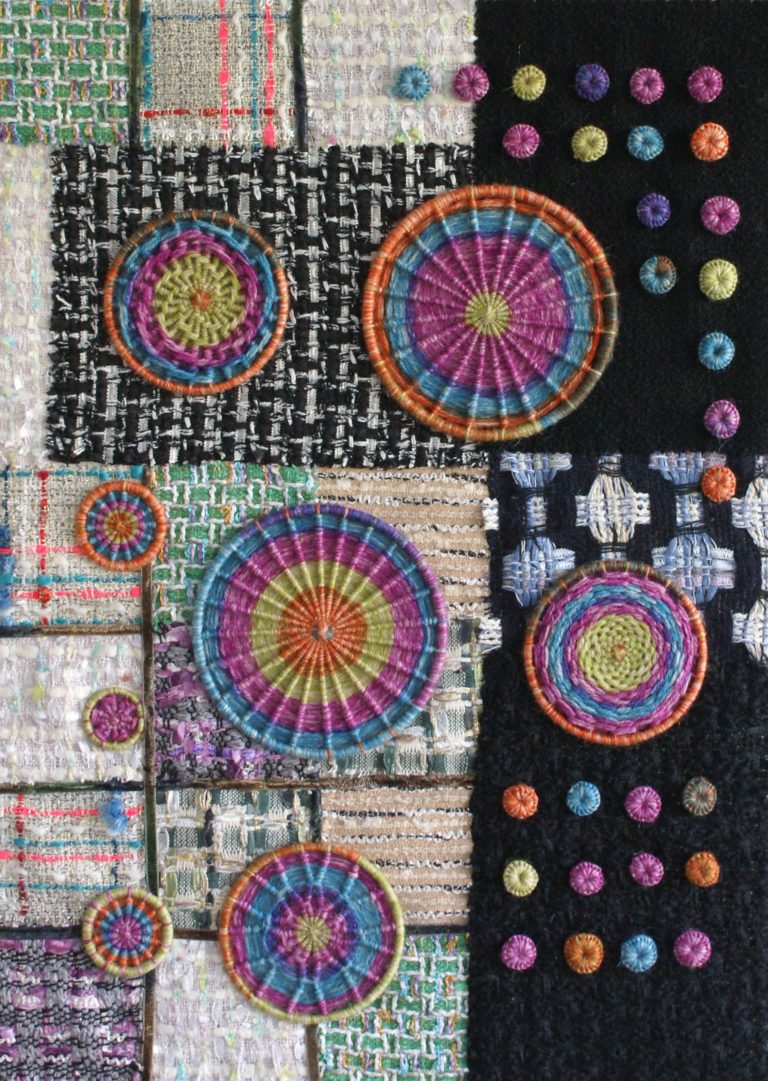 These are certainly very strange times as we watch the seasons change from our homes. Winter is now a memory and spring is well on the way. Spring is always an uplifting season as it is a time for rebirth. It is also a very busy time as the birds are beginning to nest. The trees and flowers are blossoming. The smell of the first cut of mown grass. This pandemic that is ravaging countries worldwide has made many of us stop to think. We are told to keep safe by staying indoors and distancing ourselves from others. It has also given us an opportunity to get creative.

I’m distancing myself and only going out for absolute necessities such as food and an hour for daily exercise. It is during my exercise time whilst I walk the lanes around the house and watch spring blossoming that I post your orders. The rest of my time I’m at home spending long periods in my studio dreaming up new projects for my Dorset Buttons.

My latest idea is based on the theme “take one ball of yarn”. I set myself the challenge to use one ball of yarn to make Dorset Buttons. The buttons can include the whole range of designs including Birdseye, and High Tops. All will be used in different works until I reach the end of the ball. So far, I have completed five pieces –  two collage piece using tweed patchwork pieces; a large 30cm button and  two based on slow stitching one using an old and very warn antimacassar. I still have more yarn to use up so what next? 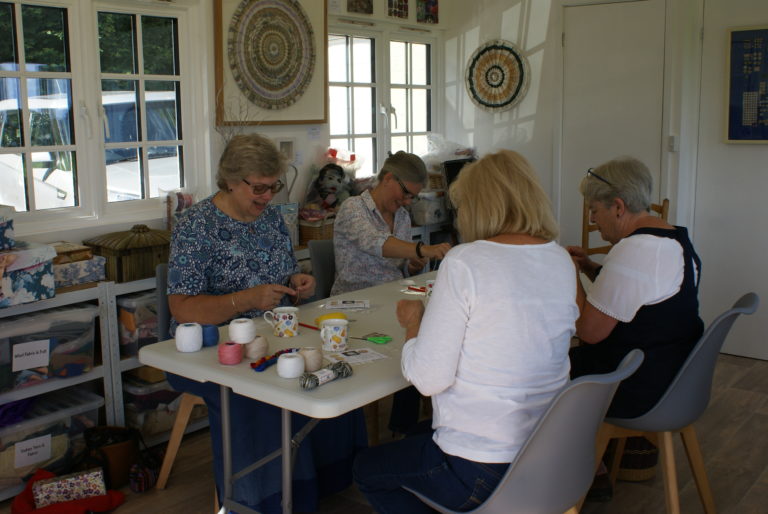 I enjoy passing my knowledge onto others and take a number of workshops in my studio for up to four people.

Earlier in 2016 I set myself a new challenge to make a giant Dorset Button. So here it is. The button is worked in the same way as a traditional Dorset Button with a modern design, like many Dorset Buttons I’ve made in the past – just on a much larger scale.

For the ring I used a 24 inch (61cm) hula hoop. After several months of careful planning, the decision on yarns I was going to use and how I was going to construct the button finally came into fruition.

I eventually decided on a mix of strips of a Designer Guild fabric to cover the hoop. For the ‘spokes’ and centre I used Mulberry silk natural double knitting yarn. The rest of the button is filled with a mix of reclaimed sari silk and other fibres, vintage black ribbon and further strips of Designer Guild fabric. Buttons with shanks, both old and new, from my button box embellish the design and add further texture. 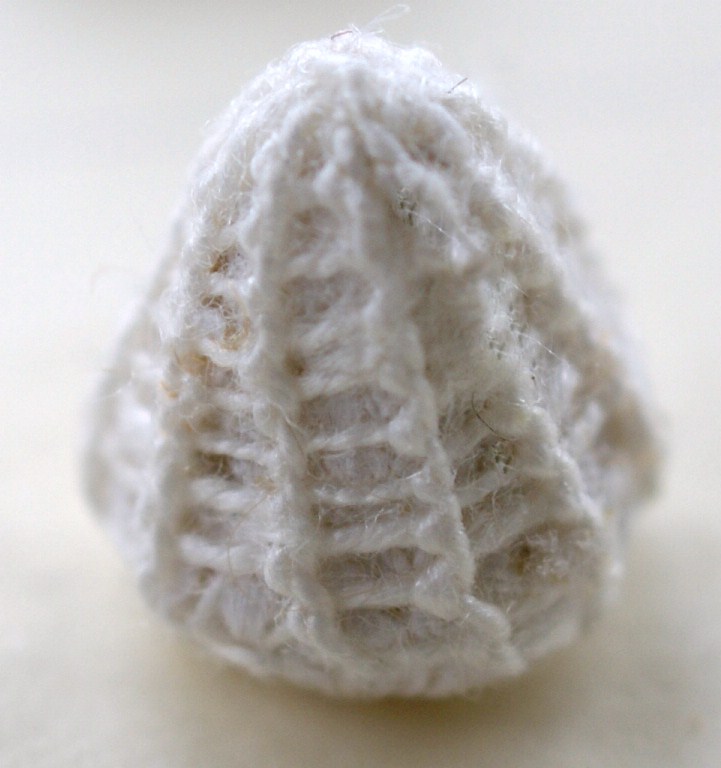 This button was part of a commission. I used the traditional method it but used contemporary materials. 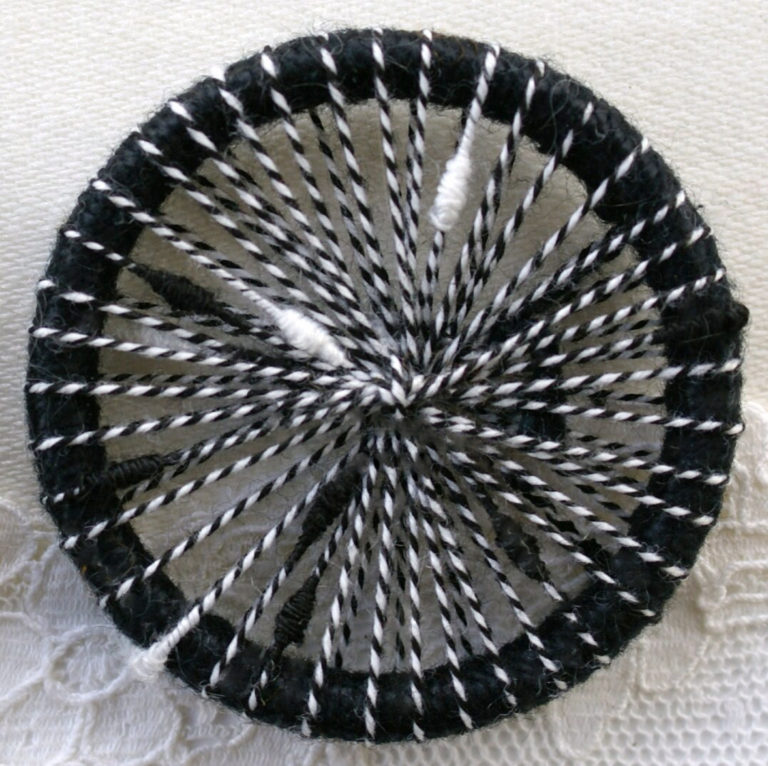 I based this Dorset Button on the Blandford Crosswheel design and used vintage French thread.