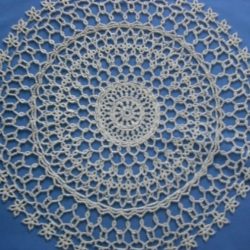 I have always been interested in textile crafts, embroidery, bobbin lace, knitting, crochet and especially tatting and have taught all these crafts to adults as recreational activities. After retiring from teaching mathematics and being widowed I wanted a focus in life. I studied for my master’s degree and then five years researching for my PhD on tatting. I have taught and researched tatting in many parts of the world including Australia, Romania, USA, Germany, Denmark as well as throughout the UK. I was a founder member of The Ring of Tatters which was set up in 1980 to promote the craft whether using a shuttle, needle, or hook. From 1998-2008 I was chairman of the Ring of Tatters, and I have just taken on the role of chairman again. As tatting is such a portable craft it is rarely noticed though there are tatters in most countries of the world; my first PhD supervisor, a senior lecturer in textiles, did ask if I was the only person who tatted!

Specialised in
I am interested in the history of tatting and in the numerous different techniques in tatting which give different visual impacts away from the very traditional simple rings and chains which is the basis of all tatting whether worked with a shuttle, needle or hook.
Open to the Public?
Yes, by appointment only
Provides Course / Training
Yes
Available for Craft Fairs
Available for educational events only