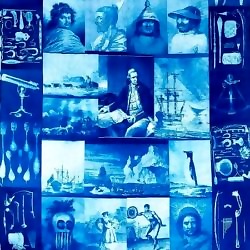 Cyanotype (Blueprinting) on Textiles and Paper using John Herschel's 1842 technique together with modern digital photographic negatives. Cathy began her interest in Cyanotype printing (Blueprint) on Fabric after seeing work by the quilter Dorothy Stapleton. After attending a course with Ruth Brown of Stone Creek Silks, she extended her technique to include photographic printing with digital negatives. From 2009 - 2016 she worked on a series of large quilted wallhangings based on the Hurley Endurance Photographs, taken in 1914-16 during Sir Ernest Shackleton's near disastrous voyage to the Weddell sea, and his escape from the Antarctic ice after his ship sank. The Endurance Quilts won Best Large Wallhanging, Best Art Quilt and Runner up Best in Show at the National Quilt Championships at Sandown in 2012. She has undertaken Endurance and Shackleton quilt commissions for the South Georgia Museum in the South Atlantic and the Scott Polar Research Institute in Cambridge, and for the second and third 'Yorkshire Ones in Antarctica' exhibitions at the Hull Maritime Museum in 2015 and at the Bridlington Spa in 2016. In 2014 she completed a series of quilts based on the Terra Nova expedition of Robert Falcon Scott to the South Pole using photographs by Herbert Ponting, which were exhibited at Sandown 2014 and then travelled to America with the World Quilt Competition as part of the UK entry. The third quilt in the series 'Uncle Bill' featuring Dr Edward Wilson, was exhibited at the National Quilt Championships in Sandown in June 2015. She has also recently completed an Edward Wilson themed work for the Wilson Museum and Art Gallery in Cheltenham and in February 2019 she presented a Captain Cook/Exploration piece to the Quilters' Guild Collection.She exhibited a new series of quilts and wallhangings for the fourth Yorkshire Ones exhibition at Hull Maritime museum in March and April 2017 on the themes of Three Ships from Hull, Captain Cook, South Georgia, Whaling and Exploration. These quilts were also exhibited at the Ferens Art gallery, Hull as part of the Ferens Open Art Exhibition 2018. Her most recent project is based on the human and animal locomotion images of Eadweard Muybridge. The first textile in this series is now in the Kingston on Thames Museum Mybridge Art Collection and is periodically exhibited in the foyer. She was also an invited artist for the recent My Muybridge exhibition at the museum.In 2019 she will be undertaking a new project for the sixth Yorkshire Ones exhibition, Threads of Green, at the Yorkshire Museum of Farming, Murton Park with themes including the Green Man. Cathy is based in London and lectures regularly to Quilters, Textile and Embroidery groups as well as Photography associations, U3As and the WI. Her talks include both the history of the Cyanotype/Blueprint technique, which dates back to the mid 19th century, and the inspiration behind the Antarctic quilt series. Proceeds from her lectures are donated to the South Georgia Heritage Trust and/or the RNLI. Her work has been featured in a number of magazines including Fabrications, Popular Patchwork. The books, 'Cyanotypes on Textiles' and 'Digital Imagery on Fabric', both by Ruth Brown, and Linda Seward's book‚ The Ultimate Guide to Art Quilting‚ also uses illustrations of her work. She presented a paper on the 'History of Blueprinting and Cyanotype on Textiles' at the British Quilt Study Group Seminar in Manchester in October 2015 which was published in Quilt Studies in May 2016.Although she is now retired from the medical profession she is still active in cancer research and is a volunteer in the St George's Medical School Archives.

Specialised in
Cyanotype photographic printing on textiles and paper
Open to the Public?
No
Provides Course / Training
Yes
Available for Craft Fairs
Available for educational events only