Veronica Calarco is a Printmaker/Weaver living in Wales. After working for a decade in graphic design she completed a degree in printmaking with an honors in weaving and then a postgraduate degree in weaving at the Institute of Arts, Australia National University in the 1990’s. After University she worked at Megalo Access Arts Art (printmaking) and Monthly Australia and on community art projects. In 2002 Veronica moved to the Kimberleys, Western Australia to work at the Kimberley Language Resource Centre and write Art Notes for Art Monthly Australia. She then moved to Alice Springs to manage an arts disability project, Mapping New Territory, and later to run Jukurrpa Arts Centre (an Aboriginal women’s art centre). In 2004, Veronica spent a two-month holiday in Wales. This led to nearly a decade of living between Wales and Australia, before she finally decided to settle more or less permanently in Wales in 2012. Veronica has completed artist-in-residence programs at Parliament House (ACT), Thirning Villa (Sydney), The Regional Print Centre (Wales), Tronud - weaving with Vibeke Vestby (Norway), Grindells Hut (Flinder’s Ranges SA), Cill Rialaig, (Ireland), Solaina a Polona (Spain), The Stone Quarry Hill Art Park (New York) and Sauerbier House (Australia). She has exhibited in Japan, China, Korea, Turkey, Wales, England, Ireland, Spain and Australia. In 2013 Veronica received an A level in Welsh and the Dan Lynn James Scholarship to study Welsh in 2014. In 2021, Veronica received a PhD printmaking, specializing in lithography, from Aberystwyth University. Veronica is a director of Aberystwyth Printmakers (https://www.aberystwythprintmakers.org.uk) and a lecturer at the School of Art, Aberystwyth University. She is currently working on a Post-doc project, funded by the Joy Welch Foundation. The project ‘We live with the land / The Land as Other’ is a multi-disciplinary art exploration exploring artists responses to the history/story of the land, language and land, a sense of place, the environmental and rewilding movements and the positioning of land by outsiders as other - a visual / playground commodity (tourism) in Wales (https://www.cyd-fywartir.com). In 2014, she established Stiwdio Maelor, an artist residency program in Corris (stiwdiomaelor.com).Stiwdio Maelor began its life as an artist in residence program, but during 2020, Veronica decided to use the time to establish spaces dedicated to traditional arts. Over the last two years, Veronica has established a print room which has an Gunning Etching press and a Furnival & Co Reddish lithography press; a weaving room with a Glimakra loom; and a photographic darkroom with a De Vere 203 Cathomag Enlarger. To celebrate this Stiwdio Maelor will be holding an exhibition of prints, weavings and analogue photographic prints in February 2022 (https://stiwdiomaelor.com/events/). 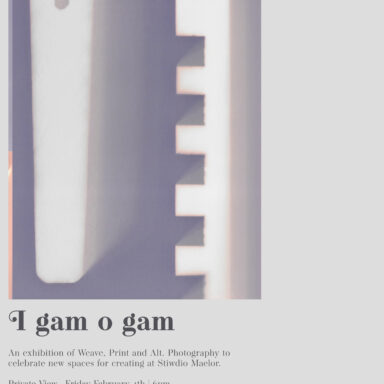 We are excited to announce the launch of our upcoming exhibition, ‘i gam o gam’
The exhibition is a celebration of all the exciting new spaces and processes that have been developing at Maelor – a weaving room, print room, and dark room.
Opening this February, Stiwdio Maelor will be showcasing some fantastic works by 25 artists from across the UK who work in weave, print and alternative photography.
Private View: Friday February 4th, 6pm
Open: 4th – 20th of February, 2022 | Saturday and Sunday | 12-4pm
Other days available by appointment – email us to book.
Stiwdio Maelor, Corris, SY209SP
Curated by Veronica Calarco & Abby Poulson
Supported by Stiwdio Maelor