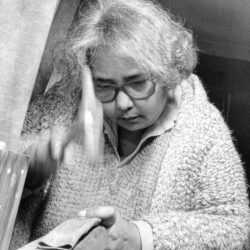 I am a self taught metalsmith and I make Copper Things. It started as a hobby in 2008, making wire jewellery. As I progressed on my creative journey I learnt to appreciate sheet metal, especially copper. So it is only natural that my work is now taking a new path in coppersmithing. In recent years I have been working mainly with sheet copper, crafting a decorative and functional range of copper jewellery, home-ware and sculptures.  I love working with sheet metal and creating interesting 3D forms and shapes, often using nothing more than a simple hammer to create textures. Recently I have also started enamelling, which has proven very popular with jewellery customers 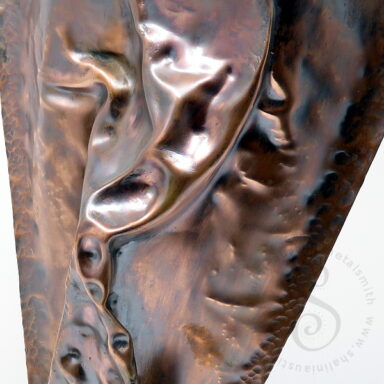 Copper Sculpture ANGST started as an experiment. I wanted to take my air-chasing skills a step further from small items of jewellery to create something bold which would bring out the natural beauty of hammered copper.

So instead of the little rustic pendants and air-chased sculptural cuffs I decided to do some air chasing on a larger sheet of bare copper.  After a couple hours of hammering, dapping, annealing and more beating I opened the piece up and it looked like a face. I posted a picture on Instagram and an artist commented “It looks like a face trapped beneath the top of the copper.”

And that is exactly what I thought too! It looked like an anguished face trying to escape. It had really turned out better than I had expected or hoped. Very exciting! So he became a stand alone sculpture and I called him ‘Angst’