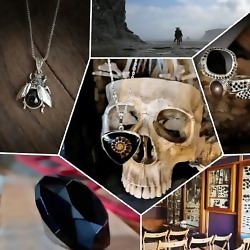 First appearing in the Early Neolithic, Whitby Jet manufacture along with flint knapping is arguably Britains oldest craft and oldest natural resourse. The manufacture itself requires little in the way of material specific tools, so the industry is difficult to detect in the archaeological record. The prevalence of jet finds however suggest that it was an important socio-economic resource during the Bronze Age, Roman, early medieval and medieval periods, returning to favour in the Victorian Era. Whitby Jet is, therefore, a culturally historic craft product.

Specialised in
The Ebor Jetworks Ltd is one of only a handful of makers still working Whitby Jet in Whitby today as a cottage industry. Co-owner of the business Sarah Steele BSc, FGA, DGA, is a Geologist and professional gemmologist. As such, much of her work is postgraduate scientific research into The Jet Group of gemstones in order to protect this culturally important material.
Open to the Public?
Yes
Provides Course / Training
Yes
Available for Craft Fairs
Available for educational events only