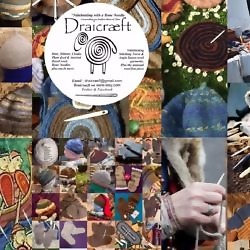 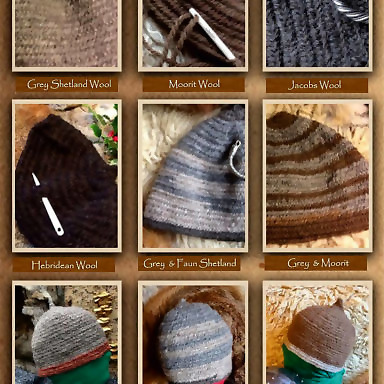 Natural Shetland and Jocobs Grey and Icelandic wool hats.
Nalbinded with a Single bone needle.
Nålebinding (Danish: literally “binding with a needle” or “needle-binding”, also naalbinding, nålbinding, nålbindning or naalebinding) is a fabric creation technique predating both knitting and crochet.

Made to order,
Please allow time for nalbinding upon which I will update you with a photo of your creation.

Can create in single colour.
Or Mix, please state.
Please contact me if you have a special colour, happy to help.

All Brown wool’s are now in stock ,
Beautiful thick Hebridean Sheep wool.
The breed of Hebridean sheep is a small primitive type. Their distinctive black to very dark brown fleece.
Sheep were among the first livestock animals to be domesticated. Genetic analysis of different sheep breeds from Europe and Asia suggests that this was not one single event, but rather there were multiple domestication episodes.
Initially sheep were reared primarily for meat, but archaeological evidence suggests that breeding specialisation for ‘secondary’ products such as milk and wool may have started as far back as
4-5000 years ago