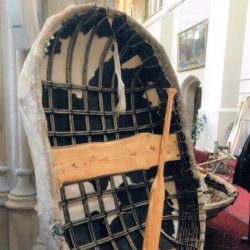 Since making his first hide coracle in 1987, Peter Faulkner has emerged as a leading specialist in hide covered watercraft, river coracles and sea-going currachs. Peter’s watercraft are constructed from wholly sustainable materials mirroring the geographical inertia of ‘old-time’ craftsmen, as all materials (hazel, willow, timber and cattle hides) are sourced locally. Paddles are fashioned from solid timber using hand tools and a shaving horse, an ancient coppice vice. No stranger to the media, Peter has been featured in publications such as Country Life, Country Living, The Countrymen and boating magazines worldwide. His numerous TV appearances include the BBC programmes Tracks, Heart of the Country, and Hand Made, and features with James May, Richard Hammond and Ray Mears, to name but a few. Commissions include five currachs for Snow White & The Huntsman, and coracles for Treasure Island (Eddie Izzard). In his first hide coracle, Teme Dipper, Peter has traversed the Rivers Teme, Severn, Wye, Thames, Spey and parts of the Shannon, voyages totalling 600 miles. A Yeoman member of the Worshipful Company of Basketmakers, and President of the Coracle Society, Peter lives with his wife Vivienne in the beautiful border country of the Welsh Marches, 9 miles west of Ludlow.