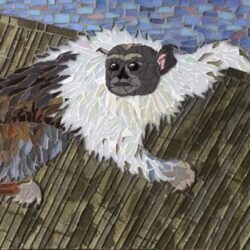 I am a Maker of wildlife mosaics, using intricately cut hard materials such as ceramic, glass, slate and marble to create mosaics of critically endangered wildlife.  My aim is to promote awareness of endangered species by providing a small platform in the art world through social media, exhibitions and competitions.     In 2019, 2020 and 2021 abelmosaics was shortlisted in the Explorers Against Extinction global Art initiative, furthermore selected as Runner Up for The Artist Award in 2020.     My work is in print and I have exhibited at the Royal Geographical Society and Oxo Gallery in London aswell as throughout UK.     All wildlife commissions generate a 10% donation to conservation charities such as Tusk; mosaics have sold to renowned conservation explorers and mountaineers.    I work on mesh/board in the “Direct” method, making eyes, beaks and claws using the glass fusion process to give personality.      Technique is influenced by the Roman Opus mosaic art form with a modern twist.       I give weekly mosaic workshops in Wiltshire.     abelmosaics is a member of the British Association of Modern Mosaics (BAMM), Heritage Crafts Association (HCA), The Wildlife Art Society International (TWASI)  and Wiltshire Wildlife Trust (WWT). 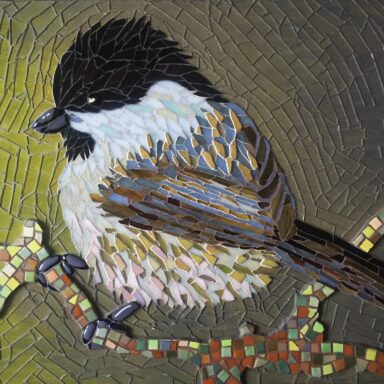 The Willow Tit is 1 of 6 UK species: Blue, Coal, Crested, Marsh and Great Tit.  Mainly found in England & Wales living in damp willow thickets, such as lowland peat bogs & marshes.   Since 1970s this species has declined by 94% especially in Southern England because  it’s habitat has dried out resulting in a loss of insects, and there is more arable land.