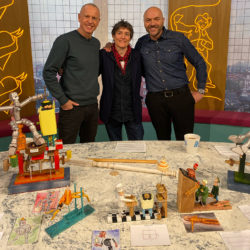 Clare Pattinson began making automata eight years ago. It is the eclectic combination of skills – humour, illustration, caricature, movement and mechanics that inspire her. With a background in ceramics, illustration and animation, it was whilst training to become a plumber, in 2009, that she began to think in a more mechanical way. She enjoys pulling items apart and examining them, and is not so worried about them breaking or not fitting back together again. In a world saturated with increasingly complex technology, these quirky mechanical toys show off their workings - springs, levers and cams. They creak into life and are delightful to engage with.   Clare set up her company, Turner Handel Traditional Toys in 2012. Since then she has been busy making one off pieces and commissions for people looking for that special bespoke personalised gift. The mechanical pieces are made from wood and other objects found on the local streets or salvaged from the sea. Repurposing discarded objects is an important part of the design process. Clare works between Kent in the UK, Mid Wales and occasionally pops over to Normandy for a bit of quiet thinking/idea developing time time, and frequently travels and works around the UK from her mobile workshop, as a nomadic maker of mechanical machines with mischievous humour. She has exhibited around the U.K. in several group automata shows, from Ruthin to Leeds, to Paul Spooner’s 70th birthday party exhibition in Bitterne, Southampton. Clare’s work has been on display in the V&A, London Craft Week, Art in Action, and has appeared on CBeebies Junk Rescue, where two brooms were transformed into an automaton of a giraffe. In December 2019, Clare featured on ‘Sunday Brunch’ (a Channel 4 program) talking about her series, 'Bots Like Us' and the 4IR and the place of robotics in our lives. Clare’s first solo exhibition was held at the CRAFTCO Gallery in Southwold from August to September 2019.   Clare believes that laughter, colour and movement are the elixir of art and life. Instagram: pattinsonclare Facebook: Turner Handel Traditional Toys Email: claris@clarepattinsonillustration.com

Specialised in
Automata and Mechanical Art 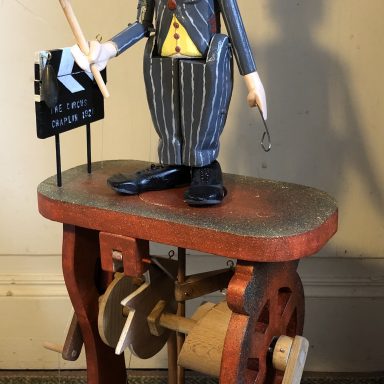 A replica of the scene from The Circus 1928, where Charlie impersonated an automaton.